Take a look at Fikanyc‘s post following to know more about Lungo Vs Espresso.

Espresso can be enjoyed either straight from the pull or as a base for another drink, but a little tweaking in its ratio can turn an espresso into a lungo. A lesser known variant of espresso, lungo is also made from an espresso machine. There are slight differences with the way each drink is prepared, but these differences lead to huge changes to the serving size, caffeine level, and, most especially, the taste.

What is an espresso?

An espresso shot is served in a tiny cup known as a demitasse, and it has a concentrated but rich coffee taste due the small amount of water used in extracting the flavor from finely-ground coffee beans. Extraction takes about 20-30 seconds and the required ratio for each shot differs at every shop, but usually 7 grams of finely-ground coffee beans is equivalent to 30 ml of hot water.

An espresso shot has 3 layers that are easily distinguishable by its color: the heart (the dark base), the body (the middle layer), and the crema (creamy foam on top adds sweetness). You can enjoy a cup of espresso by itself, or you can add sugar or milk to suit your preferences.

What is a lungo coffee?

Lungo is the Italian word for “long”, and it gets its name due to the longer period required to pull the espresso shot. Unlike espresso, lungo takes up to a minute to pull, which means more water is used during the extraction. This results in a less intense flavor, but is much more bitter than espresso because the longer time needed to pull the shot affects the extraction of the coffee grounds. Typically, a single serving of lungo is about 2 oz, and has less crema than espresso

How different are they?

Both coffee-making methods can be made using an espresso machine, but a slight change in the ratio and pulling time results in a whole new different experience. Espresso and lungo differ mainly in the following:

An obvious distinction between the two is the quantity per serving. Since espresso requires less water to prepare, it yields less liquid than lungo. A single shot of espresso typically weighs 1 to 1.25 oz, while a cup of lungo is 3.5 to 4 oz. There is no exact amount, but most coffee shops often follow this estimation.

Caffeine level depends on how long an espresso shot is pulled. A longer pull means you’re fully extracting the grounds. Most people would think that more volume means lower caffeine level, but lungo contains a little more caffeine than espresso. If you need an instant caffeine boost for an all-nighter, your go-to coffee drink should be lungo instead of an espresso shot.

Espresso has an intense and rich coffee flavor due to a shorter pull time and lesser amount of water used. The thick layer of crema also adds to the overall flavor of an espresso shot. On the other hand, lungo has a more diluted and bitter flavor. For some, this might be a delightful taste, but it’s often an acquired taste especially for those who prefer the rich aroma and flavor of espresso. 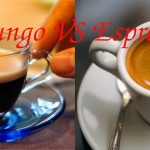