How Much Caffeine In Hot Chocolate Vs Coffee? [New 2021]

☕ Our Top Choices show
Which has more caffeine?
Which is healthier?
The verdict

Nothing beats curling up with a hot drink as the weather gets colder, with rich cups of hot chocolate, and the bold flavors of a good cup of coffee both proving to be firm favorites. We all know that coffee’s caffeine content can help to give us that much-needed boost, but how about hot chocolate? Does that also contain the caffeine that we need to get us through the mid-afternoon slump.

Which has more caffeine?

Everyone knows that coffee contains enough caffeine to give us a boost, but what may surprise many is that hot chocolate also contains a small amount, albeit in far lower quantities.  A single serving of hot chocolate has about 7 mg of caffeine, while a cup of brewed coffee has about 96 mg, depending on serving size and strength.

Aside from the caffeine content, there are other factors that can help you choose between hot chocolate and coffee, such as health benefits:

Chocolate is made from cocoa, which is known to be a good source of iron and fiber. Cocoa is also rich in antioxidants called flavonoids that help boost the immune system, what’s more, cocoa contains more antioxidants than a glass of red wine or a cup of green tea! The flavonoids found in cocoa have also been proven to promote heart health and reduce the risk of stroke and heart attack.

Not only is it good for the heart, but for the mind as well. A study made in 2013 has shown that drinking two cups of hot chocolate a day improves the memory and helps prevent Alzheimer’s. Another study done in 2014 also found direct evidence that cocoa consumption increases cognitive function. For a winter beverage, hot chocolate sure does have a lot of health benefits!

A further benefit of hot chocolate is that despite the caffeine content, it can actually help you to sleep. Hot chocolate contains theobromine, which acts as a muscle relaxant, and tryptophan which stimulates serotonin and melatonin production, two chemicals that can help us fall asleep.

Coffee has its fair share of benefits as well. As previously mentioned, coffee contains caffeine, a stimulant that promotes the production of neurotransmitters such as dopamine and norepinephrine that enhances brain activity. This leads to increased alertness, improved energy levels, and better concentration.

Planning to lose weight? Caffeine is known to improve metabolism and help break down body fat, leading to improved physical performance. Drinking a strong cup of coffee about 30 minutes before hitting the gym can give you the right boost to lose weight effectively.

Hot chocolate has a significantly lower amount of caffeine compared to coffee, so if you want something that can keep you alert and awake, drink a cup of coffee instead. But of course, hot chocolate and coffee have other health benefits that you might want to consider before making your choice. Either way, make sure to drink each beverage in moderation! 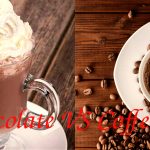 How Much Caffeine In Hot Chocolate Vs Coffee? [New 2021]